The Caspian Sea Monster or the story of the Ekranoplane

Be a real fighter pilot

Be a fighter pilot for a day!

The Caspian Sea Monster or the story of the Ekranoplane

The Caspian Sea Monster is not a real monster, but one of the biggest aircraft ever built. At the end of 1965, the United States Air Force awarded a contract to the aircraft manufacturer Lockheed to build it a new transport aircraft. It was an ambitious project. At nearly 250 feet long and weighing in at almost 200 tons, the C-5 Galaxy Would be the largest aircraft in the world. Less than a year later, and still nearly two years before the C-5 Was due to ﬂy, US intelligence made a shocking discovery: the Soviets had something even bigger. A spy satellite overflying the shores of the Caspian Sea took pictures of what looked like a 350-foot-long flying boat. It weighed over 540 tons – around three times the empty weight of a 747. The truncated, almost square Wings revealed by the reconnaissance pictures didn’t look like they were capable of lifting the machine into the air. Initially it was thought that perhaps it wasn’t finished. Subsequent analysis, though, suggested that the machine could ﬂy -just not very well. Uncertain about what they were looking at or what it was for, the Americans christened it the “Caspian Sea Monster’. 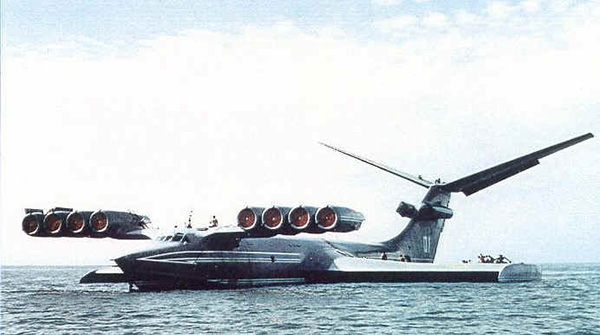 The Soviets themselves called it the KorableMaket, or “Ship-Prototype’, and that provides a much clearer indication of the nature of the beast. The KM was a machine the Russians called an Ekranoplane – neither aircraft nor ship, but almost a hybrid of the two. It relied on a principle called Wing Low – By flying very low, the KM could ride a cushion of air sandwiched between those short, broad wings and the surface of the sea. Powered by ten turbojet engines and designed to ﬂy at just 10 feet above the waves, the KM reached a speed as fast as 460 mph in trials. Not only did flying close to the sea provide as much as 40 per cent more lift, but it also meant the Ekranoplan flew below radar. While the single, huge KM prototype crashed in fog in 1980 and, because of her great weight, couldn’t be salvaged, other smaller designs were developed, including the M-160 Lun cruise missile carrier and the A-90 Orlyonok, a transport version that entered service with the Soviet Navy in 1979. The navy originally planned to acquire 120 of the A-90s, but in the end just three were ever operational. As the Soviet Union struggled in the final years of the Cold War, support and money for the Ekranoplan programme drained away. For now it remains an intriguing cul-de-sac in the history of aviation, the remains of which are rusting away in a dry dock in the Russian Caspian Sea port of Kaspiysk. 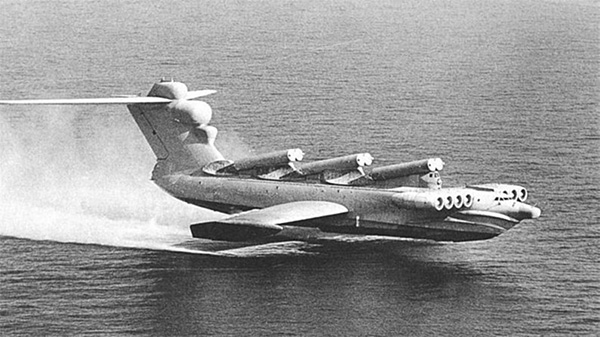