Fly a jet fighter in Lyon. We are positioning our Fouga Magister in Lyon, from the 13th to 15th September 2013. This is the opportunity to fly the jet fighter towards the Alps! We love our Fouga Magister. It is one of the best planes ever built, so agile that it has been a favourite for many display teams around the world, very secure with its twin engines and offering spectacular vistas thanks to its wide glass cockpit. Our fighter plane is in essence a jet trainer, so well designed that it has been put into active role in many air forces until very recently. The Fouga Magister is one of the best designed fighter planes ever. Easy to fly, it brings security with its twin engines, and offers a great view thanks to its wide cockpit glass. Built in the 1950s, the Fouga Magister was conceived as a jet trainer. The plane was worked so well that it was quickly adopted by various air forces around the world, such as the Israeli air Force who used the plane extensively during the six days war in 1967. The Fouga Magister is one of the most agile fighter planes ever built. So much that it has been the favourite plane of the French national display team, The Patrouille de France, from 1964 to 1980, when it was replaced by Alphajets. The ride from Lyon promises to be truly amazing, flying over vineyards and the French Alps. Contact us for additional information.

We also would like to congratulate Andy who recently travelled to Russia to fly the MiG-29. He had a fantastic time, and here are some pics of his experience. 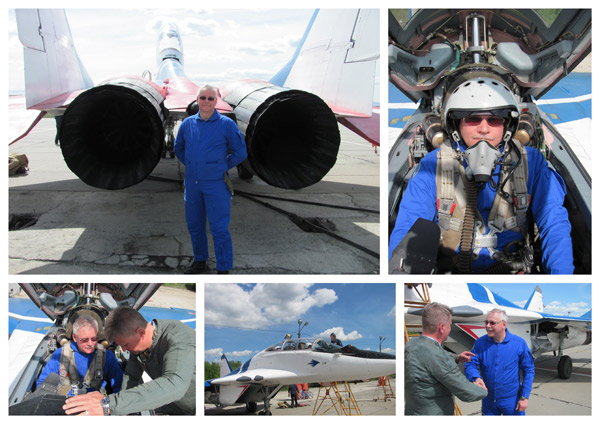