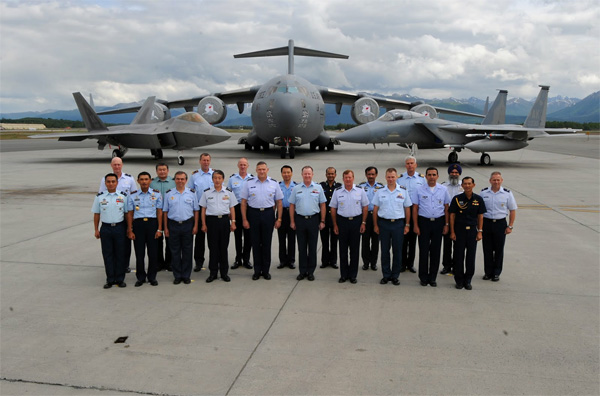 The US Air Force’s Lockheed Martin F-22 Raptors are participating in their first Red Flag-Alaska war-games with German Eurofighter Typhoon fighters and other foreign aircraft. Poland is flying its first Red Flag with its new F-16C/D Block 52 aircraft while Japan has brought its Boeing F-15J Eagles. Pilots from the 3rd Wing’s 525th Fighter Squadron and its reserve associate unit, 477th Fighter Group, are flying the Raptors during the exercise. The Typhoons, Raptors and Eagles are all flying as friendly “Blue forces” during the exercises. “They are never on the Red side,” says Major James Mixon, an exercise planner with the 353 Combat Training Squadron referring to the Raptors. The idea is to teach the visiting forces how to interact with the stealthy fifth-generation fighter, he says.

For the exercise, the Luftwaffe brought over eight Typhoons from Jagdgeschwader 74 to Eielson AFB, Alaska, says unit commander Col Andreas Pfeiffer. For the Germans, the exercise affords a unique opportunity to training over the vast ranges found in Alaska. The ranges at the base offer the ability to replicate the latest surface-to-air threats while the USAF’s 18th Aggressor squadron replicates enemy aircraft like the Russian Su-27, Su-30 and Chengdu J-10. Pfeiffer says flying with the Raptor was an interesting experience. “Its unique capabilities are overwhelming,” Pfeiffer says.