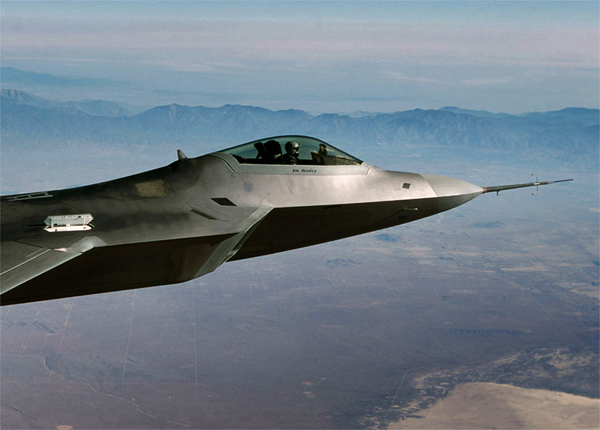 Examinations are still unergoing for the F-22 jet fighter’s big problem: oxygen deprivation. After months of analysis on this topic, findings are being brought up but conclusions will induce modifications that will be implemented as the F-22 remains one of the main assets of US Air Dominance. As an investigation continues into oxygen-deprivation issues involving the F-22 Raptor fighter, Air Force officials remain optimistic about the program’s future and the jet’s ability to perform, the director of operations for the Air Force’s Air Combat Command told the House Armed Services Committee today. Maj. Gen. Charles W. Lyon said Air Combat Command convened a working group in April, consisting of F-22 pilots, engineers, and medical and safety professionals from the Air Force, Navy, NASA, Lockheed Martin and Boeing. “We’ve integrated their findings, continued the investigative process and drawn conclusions that could not have been reached without the benefit of this collaborative approach,” he said. Previously unexplained F-22 physiological incidents, Lyon said, were a result of a combination of factors. “The trend over time has eliminated system-specific factors related to oxygen delivery system components,” the general said. “Systemic factors in the life-support system, such as the upper-pressure garment and the C2A1 filter functionalities, have been identified [and] removed, and corrective action is under way.”

The findings also determined that human factors contributed to incidents at two F-22 locations. “We’ve communicated findings and corrective actions to the [F-22] community,” he said. “This communication has reduced the ambiguity and uncertainty while significantly increasing pilot and ground crew confidence in the F-22’s life-support systems.” While the task force has ruled out oxygen quality as being the cause of previously unexplained problems, recommendations do include development, testing and fielding of a modified valve for the Combat Edge upper-pressure garment that F-22 pilots wear to help control breathing, Lyon said. “The trend is on a positive vector not seen in years,” Lyon said. “The Air Force is committed to implementing these changes to return the F-22 to normal operations, … significantly contributing to our nation’s vital interest by providing air dominance … to protect and enable the joint U.S. military force.” F-22s, the world’s most expensive fighter jet, are forward-deployed to support the objectives of geographic combatant commanders in the U.S. Central Command and U.S. Pacific Command areas of operations, Lyon noted. “This forward presence reassures our allies, enhances joint and coalition interoperability and demonstrates our resolve for lasting global relationships,” the general said. “Simply stated, the F-22 fleet combined with complimentary capabilities from our joint partners allows us to kick down the door and enable joint operations in the most demanding environments that exist now and in the foreseeable future.” Read more at http://bit.ly/RhE249