Be a fighter pilot for a day! 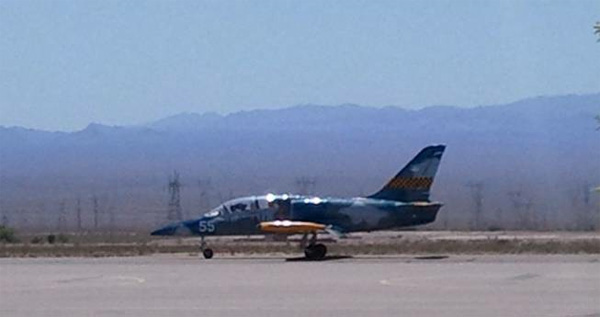 Two people were killed Friday afternoon when a small, single-engine jet crashed just west of Boulder City Airport, authorities said. According to Federal Aviation Administration spokesman Ian Gregor, a Czech-made Aero Vodochody L39 jet crashed for unknown reasons about a half mile from the airport. The plane, built as a high-performance military trainer, went down in a mostly barren desert area near a string of power lines. Local authorities are reporting that both people aboard the plane were killed. The plane crashed about 12:30 p.m. as it was taking off from the airport, Boulder City Police Chief Thomas Finn said. “It landed flat; it pancaked into the desert,” he said.

After the plane crashed, the engine was still running and caught fire, burning the rear end of the aircraft, Finn said. Another L39 jet that took off side-by-side with the other jet circled the airport and landed safely, witnesses said. The two aircraft are believed to have flown in from Southern California, offering rides to customers wanting to experience acrobatics and mock-dogfighting exercises, said Josh Jefferson, an employee at BFE, a fixed base operator at the airport. The aircraft fly in several times in the spring and early summer each year, he said. Jefferson said both planes were fueled and the pilot of the second plane was taking off when he heard the pilot issue a mayday call.

Charles Nevel, a custodian at the airport, said he saw the planes take off in tandem. The jet that crashed peeled off and slowly descended before it went out of sight behind a building, he said. The same plane had safely taken off and landed earlier in the day, he said. According to employees at various businesses at the airport, some of whom monitor aircraft radio chatter, the jet experienced some sort of difficulty when taking off. Moments after a puff of smoke appeared, the pilot radioed “mayday!” before the aircraft crashed. Victor Thomas, who was a pilot in the Air Force for 24 years, sometimes flies out of the Boulder City Airport and was there Friday. He said flying is safer than “driving on the I-15,” but the plane crashed during the most treacherous part of a flight.

“Lift off and the one to two minutes after are the most dangerous,” Thomas said. “That’s when things can go wrong if they’re going to.” Thomas said he did not think there was anything unusual or dangerous about the weather conditions Friday. The L-39 Albatross is a popular model of jet trainer aircraft developed in the former Czechoslovakia in the 1960s. It has a single turbofan jet engine and a top speed of 485 mph, according to Hopper Flight, an L-39 jet enthusiast group. Another website, L-39 Enthusiasts, lists 19 crashes of the aircraft since July 3, 1998, most recently a crash Jan. 20 in Rainbow City, Ala. The Boulder City airport is not controlled, meaning there is no air traffic control tower and pilots announce their intentions on their radios, using a shared frequency.