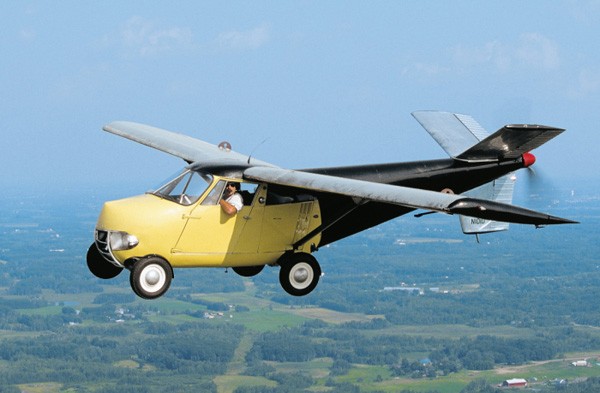 You may remember the car that flew in a James Bond movie – there might have been a few flying cars in other movies too. These were based on the Taylor Aerocar. A car with wings, that actually flies. The Aerocar Was the most successful attempt yet to produce a “flying car” – a vehicle that could be both driven on the road and flown. The brainchild of US designer, Moulton B. Taylor, the Aerocar first appeared in October 1949. It comprised a small car and a one-piece structure incorporating Wings, tail section, and propeller. With Wings folded, this structure could be towed behind the car. The owner would simply drive to an airfield and there swiftly attach the Wings and tail to the car, which then became the aircraft’s nose and cockpit.

The car’s engine was connected by a drive shaft to the propeller, mounted at the end of the tail, and the steering wheel doubled as the aeroplane’s control Wheel. Perhaps surprisingly, the Aerocar proved both air- and roadworthy. It could drive at around 60mph and ﬂy at 110mph. But like all other attempts at a “car plane”, it embodied too many compromises, ending up as neither a fully satisfactory aircraft nor a desirable automobile.

In 1956 Taylor tried and failed to drum up enough orders to justify serial production of the vehicle. Only six Aerocars were built, one of which Taylor vainly converted into the improved Aerocar III in 1968. Taylor died in 1995, but at least one of his Aerocars was still flying in the early 21st century. And now, it seems so may want to take the challenge again as Cessna, known for its manufacturing talent, has announced they might have a go at designing a new Aerocar, more practical and convenient, for the 21st century. Well, we are looking forward to that!