B-52 – an aircraft that changed the world

The L-39 will fly again soon

Be a real fighter pilot

B-52 – an aircraft that changed the world

Here is a short story of the B-52 Stratofortress, an aircraft that changed the world. In 1954, strategic air command (SAC) began taking delivery of the aircraft that would come to symbolize U.S. strategic air power for generations of bomber aircrew — Boeing’s B-52 Stratofortress, commonly known as the “Buff” (in genteel translation, Big Ugly Fat Fellow). In 1946, Boeing’s design team had begun work on a very large bomber and they finally produced the immense B-52, powered by eight jet engines hung in four underwing pods. It was not long before SAC showed the world what the B-52 could do. In 1956, within a year of its arrival in the front line, a B-52 dropped a thermonuclear Weapon with a yield of almost four megatons at Bikini Atoll. Global reach was demonstrated in January 1957 when three B-52s of the 93rd Bomb Wing, supported by KC-97 tankers, flew from California via Labrador, Morocco, Ceylon, the Philippines, Guam and Hawaii to complete a nonstop round-the-world flight of 24,325 miles in 45 hours and 19 minutes. Originally intended to penetrate enemy defences at high subsonic speeds and altitudes above 50,000 feet, the B-52 showed enormous capacity to absorb technological developments and adapt to changes in role and tactics. Its unrefuelled radius of action of well over 4,000 miles became almost unlimited with flight refuelling support. Over the years its maximum loaded weight rose to nearly half a million pounds as it took on more internal fuel, increased its Weapon-carrying capacity, and accumulated various navigation and electronic defensive systems. At the heart of the air-breathing element of the U.S. strategic deterrence triad during the Cold War, the B-52 also proved a force to be reckoned with in conventional Warfare. During the Vietnam War, the firepower for tactical operations was vastly increased in June 1965 when SACS B-52s were made available to fly combat missions. The B-’52Fs that flew the first missions from Guam were modified to enable them to carry 27 750-pound bombs internally and 24 more on external racks. Later, B-52Ds went through a Big Belly modification allowing them to load the astonishing number of 84 500-pound bombs in the bay, while retaining the external capacity for 24 750-pound bombs. Although B-52 raids sometimes struck at empty forest, captured Viet Cong reported that they were the thing they most feared. With the bombers operating at 30,000 feet, nothing was seen or heard before hundreds of bombs arrived, obliterating everything over a huge area. For those who had survived the experience of a B-52 raid, wondering when the heavens would open again could concentrate the mind and weaken the spirit. A little less than two years after they began, the 10,000th B-52 combat sortie was ﬂown, and the big bombers were increasingly relied on to break up enemy troop concentrations. 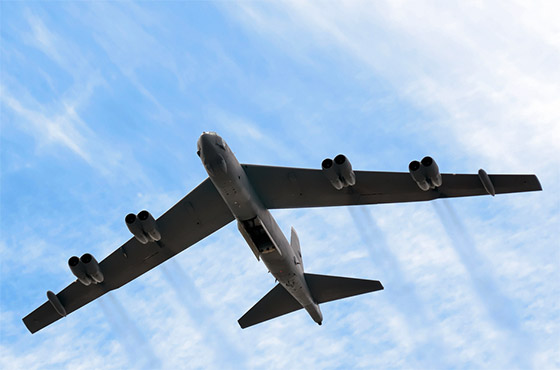 In 1968, the U.S. Marines’ base at Khe Sanh was surrounded by 20,000 North Vietnamese regulars and remained under siege for 77 days. Operation Niagara, devised to provide the Marines with air support, included formations of three B-52s arriving over Khe Sanh every 90 minutes to bomb at the direction of the Combat Skyspot radar. Initially, a buffer zone allowed the B-525 to bomb closer than 3,000 yards from the forward Marine positions. However, when enemy troops developed bunker complexes closer in, the Marine commander agreed to reduce the buffer to 1,000 feet. Ensuing strikes devastated enemy positions. Vietnamese soldier estimated that one strike alone had killed 75 percent of an 1, 800 man regiment. In December 1972, as the Vietnam War moved into its closing stages, B-52s joined the Linebaeker attacks on the North Vietnamese capital. After three days, the B-52 squadrons had flown 300 sorties but lost nine aircraft to the mass of SA-2s defending the city, six of which had been shot down on the third night. SAC therefore changed tactics. Raids were more concentrated in time, and 13-52s bombed from varying heights and directions. Steep escape turns were avoided, because they produced large radar returns, and crews made random altitude changes to confuse the SAM operators. Using these tactics, only two more B-52s were lost on the four remaining nights up to Christmas Eve. The B-52s flew 729 sorties in 11 days and dropped over 15,000 tons of bombs. There can be little doubt that the Linebacker campaigns were instrumental in forcing the North Vietnamese back to the conference table. Peace talks were resumed on January 8 and the ceasefire document was signed on January 23, 1973.

B-52s were again involved during combat operations against Iraq and the Taliban in Afghanistan. In January 1991, B-52Gs opened Operation Desert Storm with a 35-hour mission from Barksdale AFB, Louisiana, the longest bombing raid ever at that time, launching cruise missiles at power stations and communications facilities in Iraq. Other B-52s flew from Diego Garcia in the Indian Ocean, and bases in the United Kingdom, Spain and Saudi Arabia were also used. The bombers were B-52Cs, carrying loads of 51 750-pound bombs to strike at targets like the Republican Guard troop concentrations. Flying in flights of three, they released 153 bombs at a time, carpeting an area one and a half miles long by a mile wide. The B-52 attacks shattered the morale of many Iraqi units, and were instrumental in persuading large numbers of soldiers to surrender as soon as the Coalition ground offensive was launched. In one form or another, the B-52 has been operational since 1955. Over half a century later, the Buff has absorbed innumerable modifications and rebirths to remain a formidable aircraft. There is reason to believe that the aircraft’s service life could extend to the year 2040, by which time it could be flown by the great-grandchildren of the original B-52 crews. 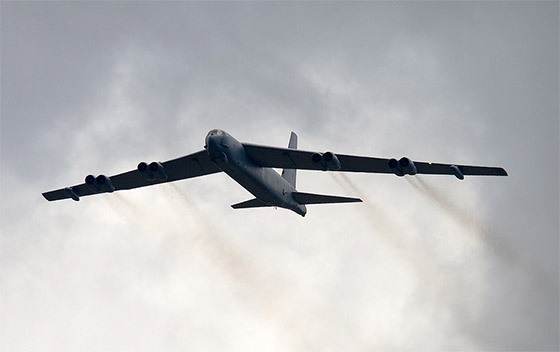