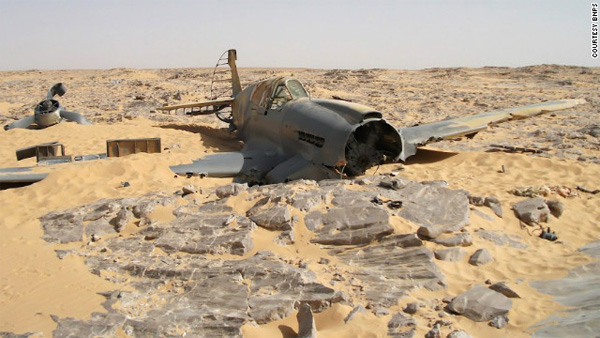 As German Gen. Erwin Rommel chased British forces across the North African desert, a stray Royal Air Force fighter crashed in the blistering sands of the Egyptian Sahara on June 28, 1942. The pilot was never heard from again. The damaged Kittyhawk P-40 – a couple of hundred miles from civilization – was presumed lost forever. Until now. In what experts consider nothing short of a miracle, a Polish oil company worker recently discovered the plane believed to have been flown by missing Flight Sgt. Dennis Copping. And almost 70 years after the accident, it’s extraordinarily well-preserved. The fighter’s “state of preservation is incredible,” British military historian Andy Saunders told CNN. “The thing just landed there in the desert and the pilot clearly got out. … It is a complete time capsule really (and) an exceptionally rare find. These things just don’t happen.” Copping’s plane — authorities have not confirmed his identity, though it has been widely reported in British newspapers — crashed after the 24-year-old pilot got lost while trying to fly it from one RAF base to another for repairs to its front landing gear, which wouldn’t retract. Copping, part of the RAF’s Egyptian 260 Squadron, was trying to get the American-built plane back in fighting condition in the run-up to what would prove to be the pivotal Battle of El Alamein.

The young pilot, according to Saunders, apparently became disoriented during the flight and headed in the wrong direction. Another RAF pilot flying nearby “tried all sorts of things” to get his attention, but Copping “bizarrely” ignored a series of warnings, Saunders said.
By the time Copping realized his mistake, he was too low on fuel to turn around. Several pieces of evidence at the crash site — including a parachute believed to have been used as shelter from the sun — indicate the strong probability Copping survived the landing. He almost certainly could not, however, survive the blazing Sahara heat for long. Copping “would have stayed by the aircraft initially,” Saunders noted. While the plane’s glass valve radio was likely knocked out of commission by the crash, “the parachute gives him shelter and a means to be identified from the air. The guy also would have had a little silver signaling mirror to attract passing aircraft and a pistol with a limited number of flares.” Why would Copping leave the wreckage? “Maybe he got desperate when he saw nobody was coming for him, and thought (the) only way to survive was to walk out” and look for help, Saunders speculated. RAF pilots in North Africa at that time didn’t have much in terms of rations. Copping’s supply would have been very limited, assuming he had food or water at all. Pilots were “flying with very basic life support systems,” Saunders said. “His chances of survival were not good.”

As Copping’s story becomes known, British authorities are hoping to bring his plane back to the United Kingdom and put it on display at the RAF Museum in London. Museum representatives are working with the British Embassy in Cairo and Britain’s Ministry of Defence on a possible recovery operation. ”It’s an incredible story,” said museum spokesman Michael Creane. “It’s a perfect story in so many ways. It’s incredible the plane sat there in this untouched part of the world for so long. … We’re dedicated to recovering it as fast as we can. This would be a fantastic asset.” Most of the plane’s fuselage, wings, tail and cockpit instruments remain intact. For safety reasons, Egyptian officials have removed its ammunition and guns. 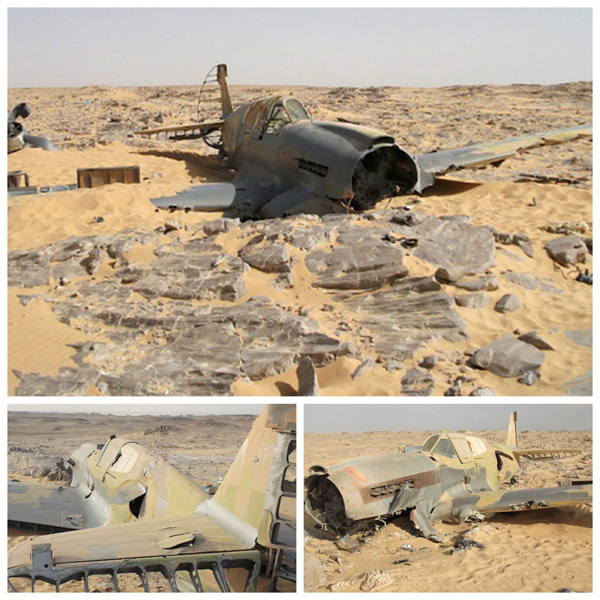