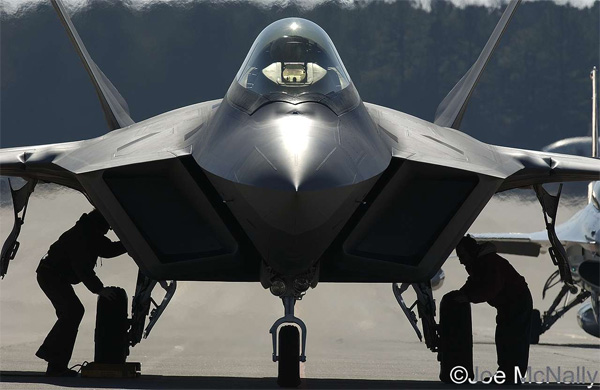 The last F-22 Raptor to be built for the US Air Force took-off on its inaugural test flight earlier today with a company pilot at the helm, a Lockheed Martin executive says. “I was just watching the take-off of aircraft 4195, so it’s now made its first flight on its way to delivery,” says Jeff Babione, Lockheed’s F-22 programme manager. “We just had everyone outside the building watching the take-off of the final Raptor.”

Lockheed test pilot Bret Luedke– a veteran aviator who has flown almost every Raptor the company has ever built–is flying the aircraft. Babione says that company pilots usually fly two sorties to verify that the aircraft is functioning correctly. Super-cruise testing is usually conducted over Tennessee and Alabama, he says. The aircraft is capable of cruising at around Mach 1.8 without afterburners and has a top speed of around Mach 2.2. “It’s a real rigorous shakeout to make sure the aircraft is performing as designed,” Babione says.

Following the company test flights, government Defense Contract Management Agency (DCMA) pilots repeat those two sorties as part of the military’s acceptance procedures. The lead DCMA test pilot is Robert “Trigger” Wallace. Only after the aircraft completes those four test sorties will it receive its stealth coatings, Babione says. The aircraft also has to complete a mandatory government inspection. Lockheed will formally deliver aircraft 4195 to the USAF on 2 May, but the company will probably finish the work well ahead of time, Babione says.

The aircraft will be picked up from the factory by Lt Col Paul Moga and will then become the new “flagship” for the 525th Fighter Squadron at Joint Base Elmendorf-Richardson in Alaska. Lockheed only has five F-22s left to deliver to the USAF. The air force recently took delivery of tail number 4190, which became the new flagship for the 90th Fighter Squadron-which is also part of the 3rd Wing at Elmendorf.

The aircraft passed its mandatory government inspection with flying colours, but it also has to be inspected once it arrives at its home station. The 4190 landed at Elmendorf “code one”-or with no problems to report-but it has yet to complete inspections. Babione says that he’ll know in the next few days if the aircraft will get a “Platinum Star” rating for having “zero defects.” The next aircraft, tail number 4191-which is the last jet built under a 60-aircraft, multi-year purchase-is set to be formally handed over to the USAF on 15 March, Babione says.