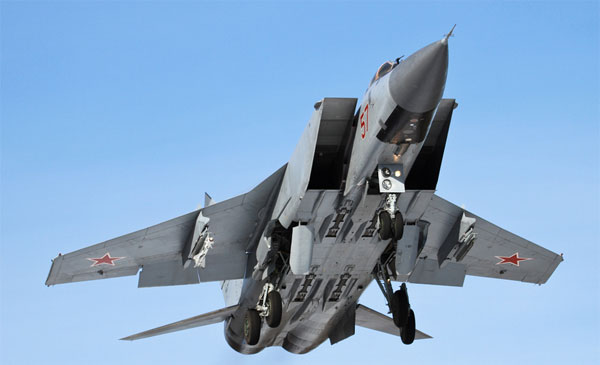 Russia is testing its nation’s aerospace defense capabilities and launching the super interceptor MiG-31 Foxhound to do so. The fighters, “in conjunction with A-50 airborne warning and control system aircraft, are performing continuous missions to protect the airspace, including from cruise missile strikes,” the ministry said in a statement. The aircraft are to be refueled while still in the air. The three-day exercise, in which the fighters will fend off aerospace attacks, is part of a series of random checks of the Russian armed forces that began in February. It involves Air Force units from the Western Military District, General Staff chief Valery Gerasimov said during a teleconference, adding that the upcoming maneuver had been ordered by Defense Minister Sergei Shoigu. A total of 8,700 personnel, 185 warplanes and 240 armored vehicles are participating in the checks, overseen by Col. Gen. Vladimir Zarudnitsky. The checks include missile launches at the Ashuluk test range in Astrakhan, Zarudnitsky said. This is a major operation designed to check defense response, and will also show the rest of the world where Russian power is at a very troubled time, especially when Russia is selling arms to Irak and Syria. The MiG-31 is a supersonic interceptor aircraft developed to replace the MiG-25 “Foxbat”. The MiG-31 was designed by the Mikoyan design bureau based on the MiG-25. Like the MiG-25, MiG-31 is a large twin-engine aircraft with side-mounted air intakes, a shoulder-mounted wing with an aspect ratio of 2.94, and twin vertical tailfins. Unlike the MiG-25, it has two seats, with the rear occupied by a dedicated weapon systems officer. Our friends in Russia were operating the MiG-31 for fun rides a few years back, but they had to stop as it was too expensive. Instead, they are using now the MiG-29 which is more fuel efficient, and also has a large canopy which offers a greater view. If you are interested in flying such aircraft, check our specialized page: http://www.flyajetfighter.com/fly-the-mig-29-fulcrum/