The F-22 Raptor is back in the air

With the great season of air displays coming soon, we wanted to a have look at one specific formation which is one of the greatest in the world – the Red Arrows. Officially known as the Royal Air Force Aerobatic Team, is the aerobatics display team of the Royal Air Force based at RAF Scampton. The team was formed in late 1964 as an all-RAF team, replacing a number of unofficial teams that had been sponsored by RAF commands. The team are renowned throughout the world, acting as ambassadors of Great Britain. They promote the professional excellence of the Royal Air Force, assist in recruiting into the Royal Air Force, contribute to Defence Diplomacy when displaying overseas and support wider British interests through the promotion of British industry by demonstrating the capabilities of its equipment and expertise. The Red Arrows badge shows the aircraft in their trademark diamond nine formation, with the motto Éclat, a French word meaning “brilliance” or “excellence”. Initially, they were equipped with seven Folland Gnat trainers inherited from the RAF Yellowjacks display team. This aircraft was chosen because it was less expensive to operate than front-line fighters. In their first season, they flew at 65 shows across Europe. In 1966, the team was increased to nine members, enabling them to develop their Diamond Nine formation. In late 1979, they switched to the BAE Hawk trainer. The Red Arrows have performed over 4,000 displays worldwide in 52 countries. 2013 will be the 49th display season for the Red Arrows in which they will continue to enthrall, captivate and inspire millions of people both in the UK and around the world with a series of displays and flypasts at a wide variety of events. 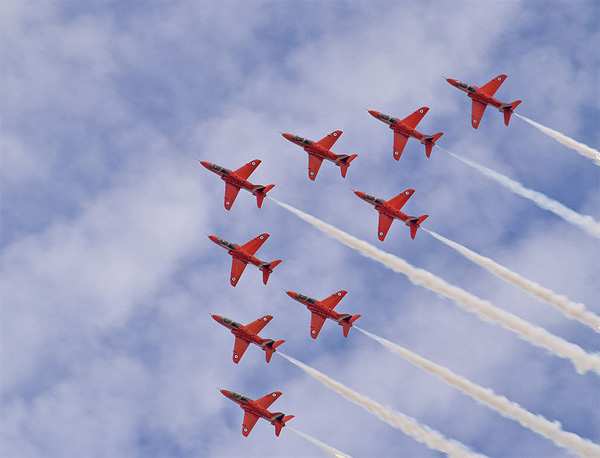