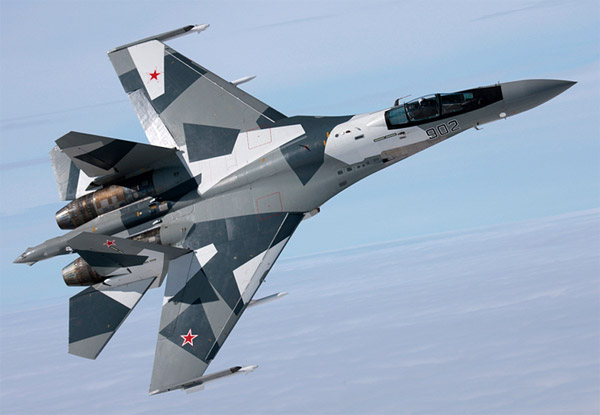 This year’s Paris Air Show should be good, with many innovations being unveiled, especially by aircraft makers and systems designers. But most of all, what makes the success of the Bourget Air Show for the general public is the aerial display. And this year, the Su-35 should have a great role in satisfying the crowds. Training flights of the Su-35S take place these days at the Zhukovsky airfield at the M. M. Gromov Flight Research Institute in preparation for participation in the le Bourget-2013 International Air Show. The Honored test pilot of the Russian Federation, the Hero of Russia Sergey Bogdan works on two sets of aerobatics – for normal and complex weather conditions. Participants and visitors of the largest exhibition of the world aircraft industry achievements will be able to watch such a complex and spectacular flight figures as spatial barrels, somersaults, a flat spin, and, of course, the famous “Pugachev’s Cobra”. Next week, upon completion of test flights, the aircraft will fly to France to continue getting ready for the flight program of the air show. The newest multirole Su-35S fighter will be presented for the first time in a foreign air show. Its premiere flight program was held at the MAKS-2009 air show in Russia. Su-35S is a deeply modernized super-maneuverable multirole fighter of the “4++” generation. The applied technologies of the 5th generation provide for the superiority of Su-35S aircraft over similar class fighters. The aircraft has a much better flight characteristics compared with standing analog fighters and more perfect on-board avionics. Aircraft characteristics exceed all European tactical fighters of the 4th and “4+” generation like Rafale and Eurofighter 2000, as well as upgraded American fighters such as F-15, F-16 and F-18. Su-35S can also successfully counter the 5th generation fighters – F-35 and F-22A. This aircraft, in particular, is the fastest (2,400 km/h at an altitude of 11 km) fighter, it has a higher thrust, it also has an almost two-fold benefit to the modern French (Rafale) and Swedish (Gripen) fighters in the flight range (without suspension tanks – 3600 km). The Gripen NG aircraft, for example, has only one engine, so it has a smaller combat survivability and reliability. The American F/A-18 fighter is inferior to the Russian Su-35S in the flight altitude. So the show should be exciting for everyone to admire such a jet fighter. Get more info about the show >> http://www.salon-du-bourget.fr/