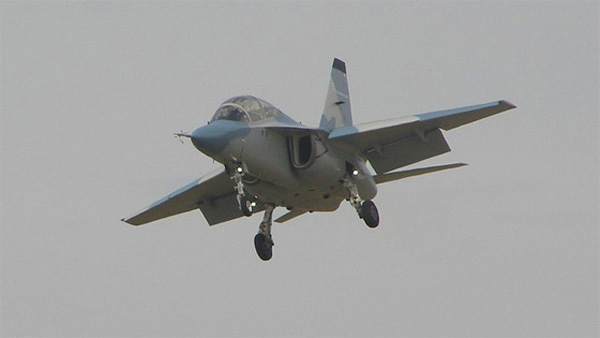 The Alenia Aermacchi M-346 is a jet fighter trainer developed by a joint venture company between Yakovklev and Aermacchi. The project began in 1993 when Aermacchi signed a joint venture with Yakovlev who developed the training aircraft of the Russian army in 1991. The result of this cooperation as the MB-339 but soon differences between manufacturers made itself felt, and in the end each aircraft developed in his corner. Aermacchi retained the rights to sell the aircraft for the world, except Russia and other partners of Russia.

Version M-346 is a modified and improved version of the original jet fighter. The prototype flew June 7, 2003 and the flight demonstration was made at the Paris Air Show in 2005. The M-346 is a training aircraft which allows pilots to test their skills and in particular to its top speed as the aircraft can reach Mach 1.15. The plane does not use afterburner, which also helps reduce operational costs. The plane is designed on a “fly by wire” technique with a fairly advanced avionics for aircraft training, which also allows him to take angles up to 40 degrees. The Aermacchi M-346 aircraft is now the training aircraft of Italian fighter pilots. The export success is relative with countries like Dubai, Israel who have demonstrated an interest in the aircraft.

What does it take to be a fighter pilot?