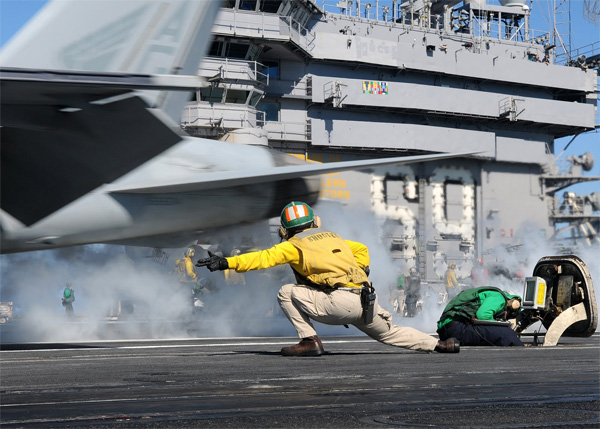 Controlling drone aircraft could one day be as simple as waving your arms. Yale Song and colleagues at the Massachusetts Institute of Technology have developed a way of controlling drones taxiing on a runway using gestures. Drones can already land autonomously on aircraft carrier decks, but humans control them during taxiing. With piloted aircraft, navy flight-deck marshals use a codified set of hand gestures to instruct them to, for instance, cut their engines, open weapon bay doors or move to a refuelling bay.

To test whether these gestures could be recognised by a computer, Song’s team wrote an algorithm that analyses 3-second clips from a depth-sensing camera trained on a person performing flight-deck gestures. The system recorded body, arm, wrist, hand and finger positions, and was subsequently able to recognise a flight-deck command correctly 76 per cent of the time.

The team says it is now working on improving recognition levels. The research will appear in a forthcoming issue of ACM Transactions on Interactive Intelligent Systems. “I can’t see why this wouldn’t work ultimately,” says Peter van Blyenburgh, head of UVS International, a drone trade group. “The gestures are clearly defined – an image sensor should be able to pick them up.”

The MIT team isn’t the only one interested in gesture-controlled drones. In 2009, aerospace firm Boeing, based in Chicago, filed a patent on the idea of controlling squadrons of unmanned aircraft using human gestures. That would mean a pilot on the ground covered in motion sensors could control a drone swarm flying overhead.