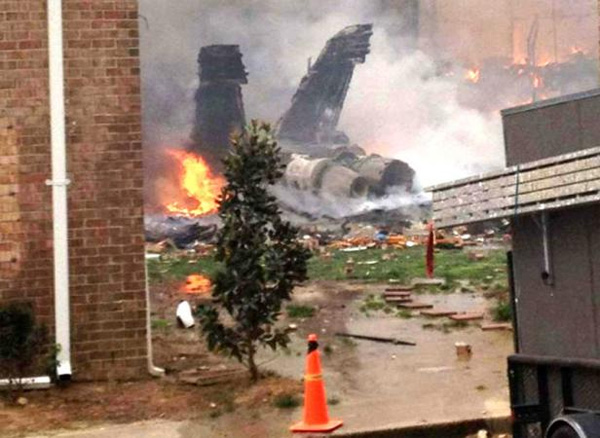 A senior Navy officer expressed his concern for the community and thanked emergency responders following today’s crash here of a two-seater F/A-18D Hornet aircraft assigned to Strike Fighter Squadron 106. Both aircrew safely ejected from the aircraft, officials said. The crew’s squadron is based at nearby Naval Air Station Oceana. The Navy is coordinating with local authorities, officials said. “My thoughts and prayers are with our citizens and families who have been impacted by the tragic crash today in Virginia Beach by an aircraft from NAS Oceana,” Navy Adm. John C. Harvey Jr., commander of U.S. Fleet Forces Command based at Norfolk, Va., said in a statement issued today.

“I deeply regret that some in our community have lost their homes, and I, like many, pray for the well-being of all,” Harvey added. Initial reports indicate that at approximately 12:05 p.m., the jet crashed just after takeoff at a location just off of the base. News reports also say the stricken jet struck some apartment buildings located near the base. Reports say several civilians were being treated at a local medical center. In his statement, Harvey expressed his gratitude to the citizens of Virginia Beach and the Mayfair Mews Apartments, as well as Virginia Beach’s first responders “for their immediate and heroic response to take care of our aircrew after they ejected and all at the scene of the mishap.”

Harvey said all resources “are being made available to the City of Virginia Beach as we all deal with the impacts and recovery from this terrible mishap.” “We will continue to work directly with the City of Virginia Beach and continue to provide all possible assistance,” the admiral added. Harvey said a complete investigation into the cause of the crash will be made. He also pledged to “share all information we have as soon as we are able to do so.” VFA-106 serves as the East Coast Fleet Replacement Squadron. The unit’s mission is to train Navy and Marine Corps F/A-18 replacement pilots and weapon systems officers to support fleet commitments.