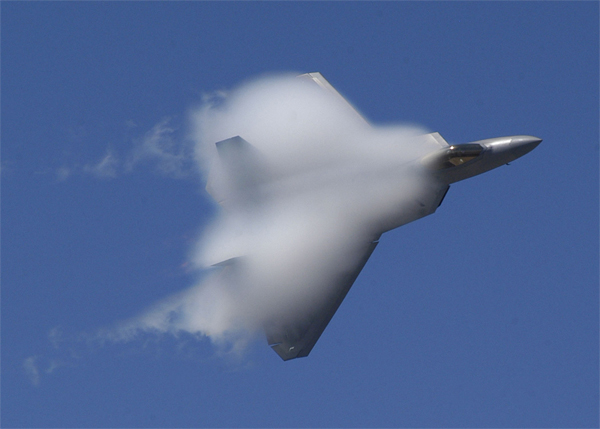 Defense Secretary Leon E. Panetta is satisfied the Air Force has identified the cause of hypoxia-like symptoms 12 F-22 pilots suffered, and restrictions he placed on use of the fifth-generation fighter will be lifted gradually. Air Force Secretary Michael B. Donley, Air Force Chief of Staff Gen. Norton A. Schwartz and other Air Force leaders told Panetta on July 20 that they are confident the root cause of the symptoms is the supply of oxygen to pilots and not the quality of oxygen, Pentagon Press Secretary George Little said today at a news conference. Reporters asked why these shortcomings weren’t picked up earlier. “I can’t go back in time and conduct technical archeology on this type of aircraft,” Little said. “I would say the Air Force has taken very prudent measures … over the past year and a half or so with respect to the F-22. And they have come to the conclusion as to what is causing these hypoxia events. “With any aircraft — be it the F-22 or the F-16, [or] with a helicopter or a ground vehicle — we can never take the risk to zero,” he said. “But we have an obligation to our troops and our airmen to make whatever equipment they are using as safe as possible, and that’s what we think we’re doing here.”

In May, Panetta directed the Air Force to limit all F-22 flights to remain near potential landing locations to enable quick recovery and landing should a pilot encounter oxygen deprivation. The secretary also directed the Air Force to expedite the installation of an automatic backup oxygen system in all of the planes, and he asked for monthly progress reports as the service continued the search for the root cause of the problem. These actions were in addition to steps the Air Force already was taking to determine the root causes of the hypoxia-like symptoms pilots have experienced. Panetta made this decision, in part, due to the reluctance of some pilots to fly the aircraft, Little said at the time. The Air Force has made two changes that appear to have solved the hypoxia problem. The first was to order pilots not to wear the pressure garment vest during high-altitude missions. Pilots use the vest to combat G-forces generated flying a high-performance aircraft. The vest inflates to stop blood from pooling, which would cause pilots to black out during high-speed turns. The Air Force found that a faulty valve “caused the vest to inflate and remain inflated under conditions where it was not designed to inflate, thereby causing breathing problems for some pilots,” Little said. “The garment has been suspended from flight since June.” This problem was not identified during initial F-22 testing.

Second, the Air Force removed a canister filter from the oxygen delivery system, and that has increased the volume of air flowing to pilots. The service also is looking at improving the oxygen delivery hose and its connections. Following the Air Force briefing last week, Panetta decided to lift restrictions on the aircraft gradually. Beginning today, F-22s may resume long-duration flights for deployments, aircraft deliveries and repositioning of aircraft. “Secretary Panetta has authorized deployment of a squadron of F-22 aircraft to Kadena Air Base, Japan,” Little said. “The aircraft will fly to Japan under altitude restrictions using the northern Pacific transit route.” Following completion of the flight to Japan, the Air Force likely will approve most long-duration flights, officials said. Still, initial long-duration flight routes will be designed to pass near airfields. The Air Force also has imposed an altitude restriction on the aircraft so pilots will not need to wear the pressure vest. Training sorties will remain near runways until completion of the Air Force Scientific Advisory Board-recommended corrective actions. This is expected by the end of the summer.The Air Force will notify Panetta when fixes are finished with the pressure vest and related cockpit life support components. Pending successful completion of associated testing and NASA’s independent analysis, Panetta can decide to return the F-22 fleet status to normal operations.